The LIONBAG – upcycled cement bags combined with African wax print fabrics turn into robust and chic tote bags. The accessory of the season!

The upcycled cement bag is hidden in our LIONBAG backpack: We placed it between the layers of fabric. Here it not only brings stability, it also creates a wonderful rustling sound!

These small bags, our LION PAWS, are also very popular. A thin layer of foam keeps the shape and protects everything inside – from smartphones to mascara.

Our collection of long and short aprons is constantly growing. The right choice for every cook and every grill master: excitingly different in look and practical at the same time.

Complementing the aprons, our team also produced potholders. They are lined with recycled towels. African joie de vivre in the kitchen – colourful and fair.

Table runners with elegant mitred corners made from African wax print fabrics! They are very versatile – either used directly on the wood of the table or as an accent on a tablecloth.

Go to the shop

The Inner Values of the LIONBAG 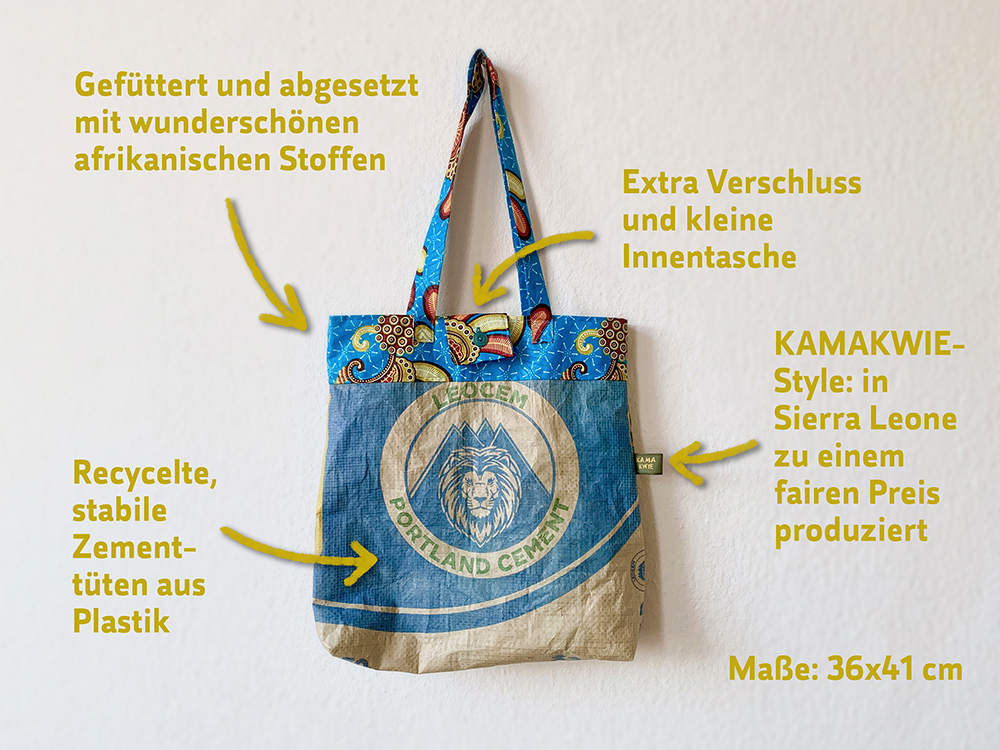 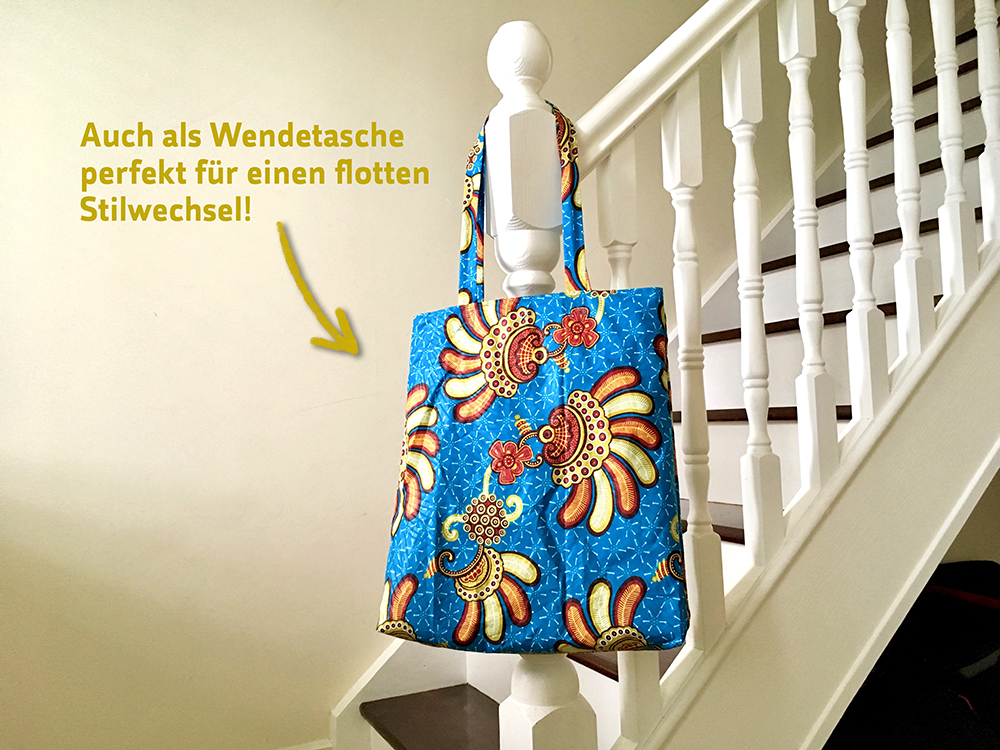 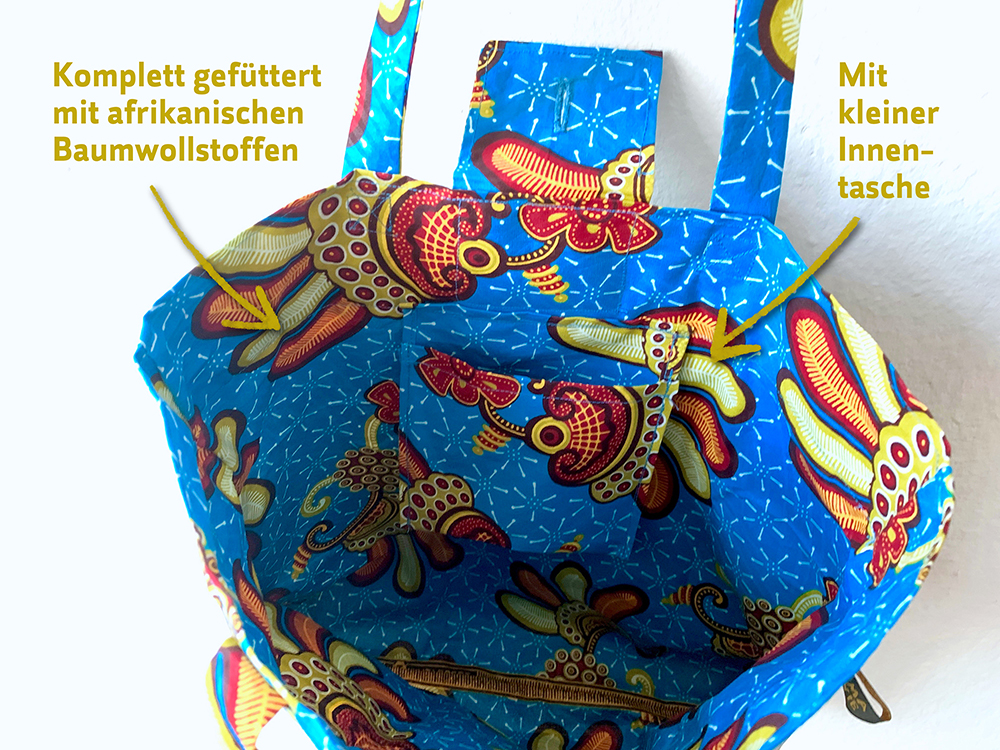 LIONBAGS are produced from upcycled plastic cement bags and new African fabrics. The recycled outer material from used „Leocem“ sacks makes the bags very sturdy and water-repellent. Heavy purchases are stored here just as securely as folders or laptops. The bags are lined with colorful wax print fabrics that transport a zest for life. A small pocket inside safely stores smartphone or keys. The bags can be secured with a narrow strap in the middle and the handles are long enough that the bags can be carried comfortably over the shoulder or in the hand. The bag can be turned inside out so that the colorful fabric is on the outside and the sturdy cement bag is on the inside. It was designed by the German artist Marion von Oppeln. 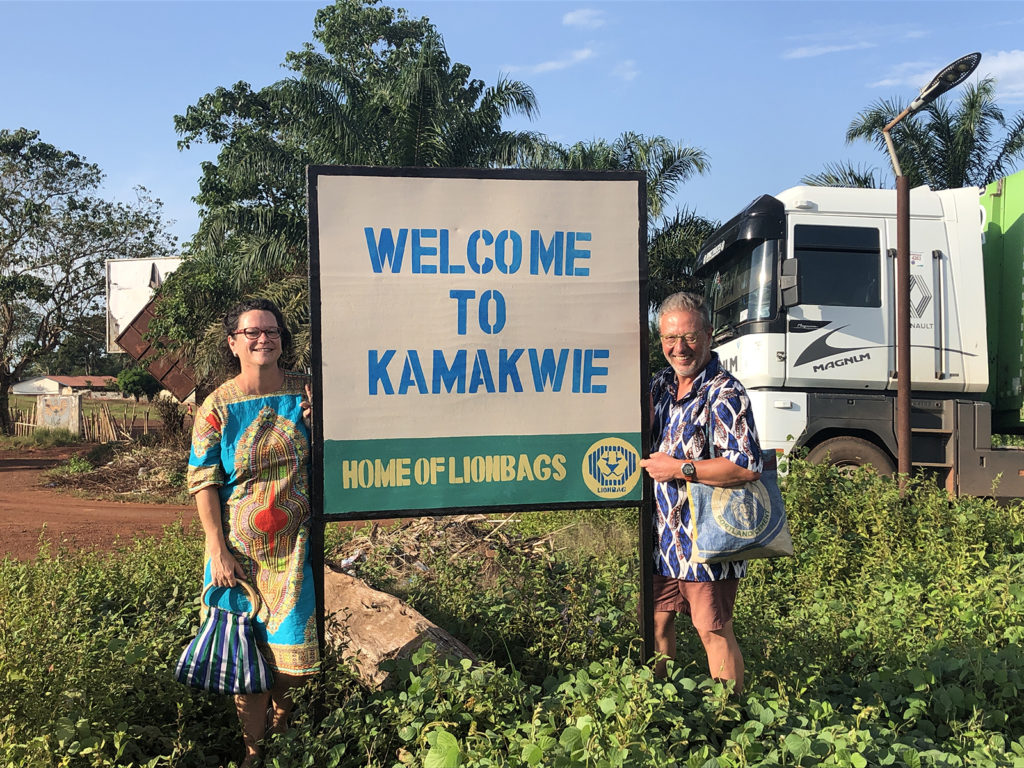 Marion von Oppeln is the inventor of the LIONBAGS. The idea for this came about in 2019 as part of her voluntary work for the German association „Mahmoo eV – Zukunft in Kamakwie“, which she has headed together with her husband Lars Bessel since it was founded in 2017. The association from Schleswig-Holstein supports the vocational school in Kamakwie in the north of Sierra Leone with scholarships. But the realization quickly matured that many of the seamstresses trained there in the seventh poorest country in the world could not find a job after school and just as little money for their own sewing machine. Without further ado, Marion and Lars opened their own sewing workshop in Kamakwie!

With each bag and other product you order, you create a real future for young people in West Africa. Despite high transport costs, custom duties, taxes and fees as well as material costs, the tailors earn a very good income (see „Transparency“). In the beginning, only half of the wages are paid to the tailors, the other half is saved for them in order to finance their own sewing machine; this is to prevent dependence – also from us.

We offer young women and men in Kamakwie / Sierra Leone a professional perspective. We don’t want to hand out alms. We want to mediate between the young, proud producers in West Africa and the buyers in Germany. Furthermore, we recycle plastic waste in the form of cement bags in an intelligent way – a great version of „upcycling“.

If you are interested, you can find out more about the association Mahmoo e. V here.

The used cement sacks are washed by the seamstresses before processing. Since there is no running water in Kamakwie, it is pumped out of the deep well by hand. Of course there are no washing machines. As a result, it can sometimes happen that a few pieces of cement remain in the bags. We recommend simply hand washing the bag again in cold water and hanging it up. The material is so stable that no ironing is necessary. The same applies to stains that occur during use.

The LIONBAG project is a „social business“ – no charity but also not a „cash cow“.
With the money earned here, dreams come true and the environment is also protected – in a very transparent way:

The intercontinental business is organized and processed by the „LBMD-Verlag“ from Nortorf near Wilster (Schleswig-Holstein). According to German association law, the above-mentioned association „Mahmoo eV“ is not allowed to trade, i.e. make no sales. Publisher Lars Bessel is chairman of the association and uses his professional opportunities to realize the project. 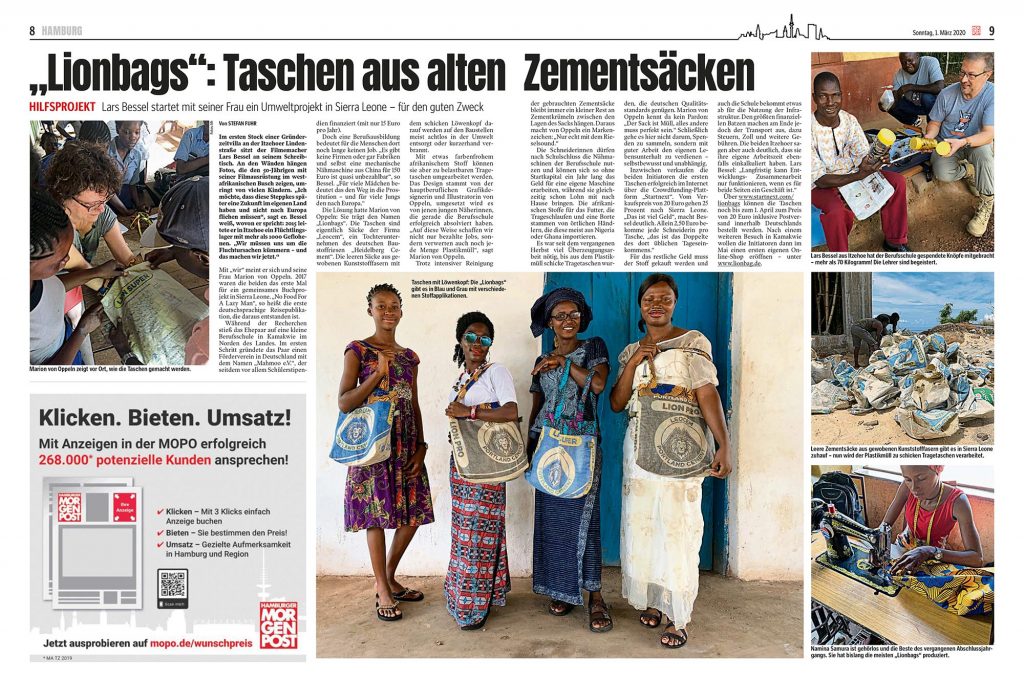 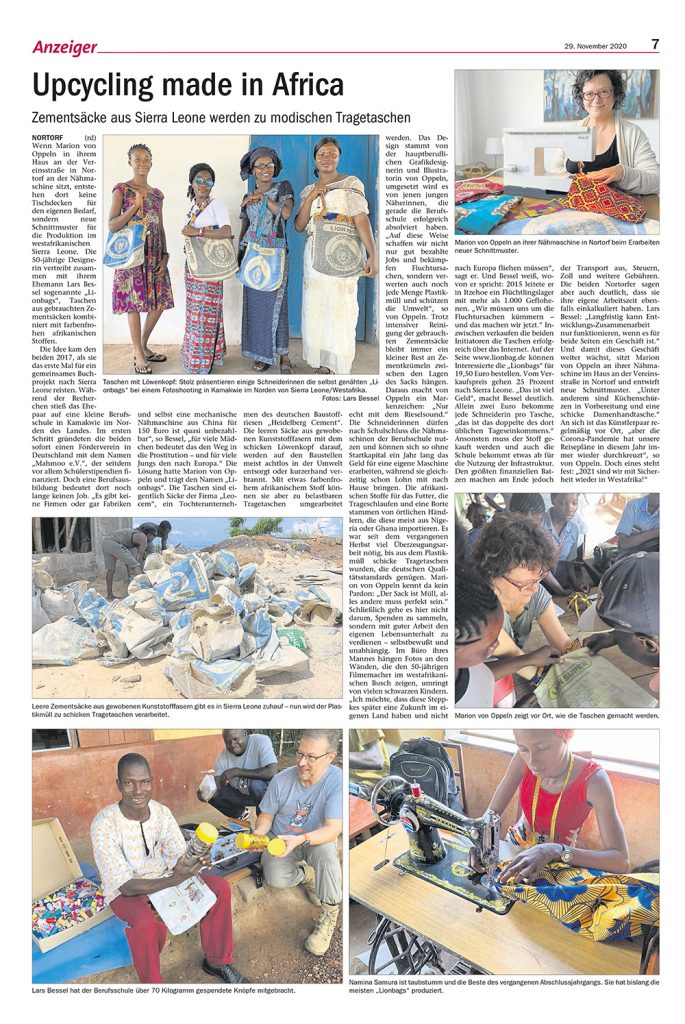 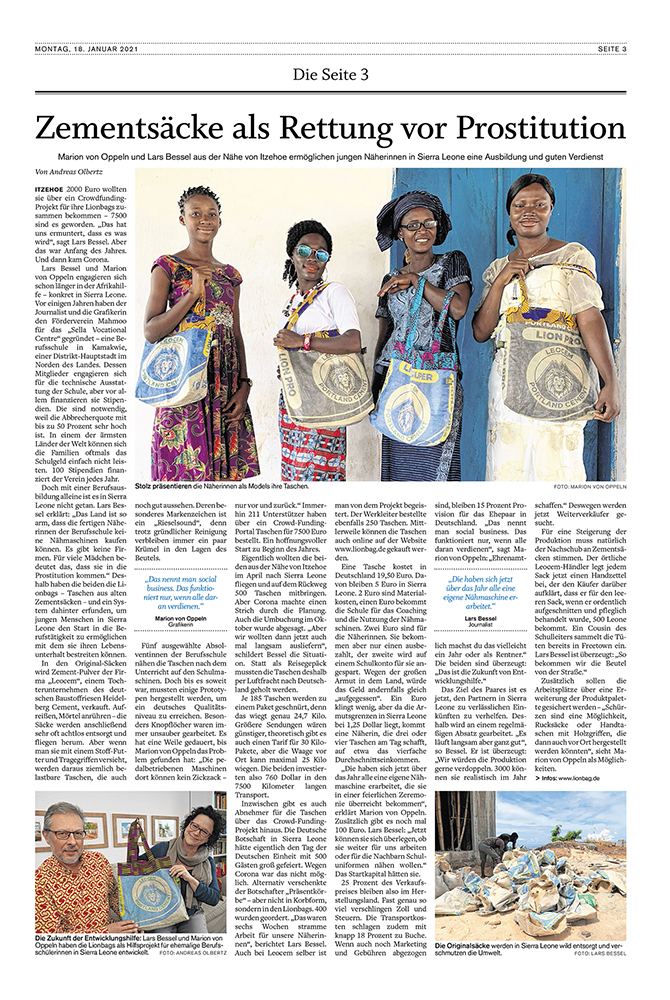 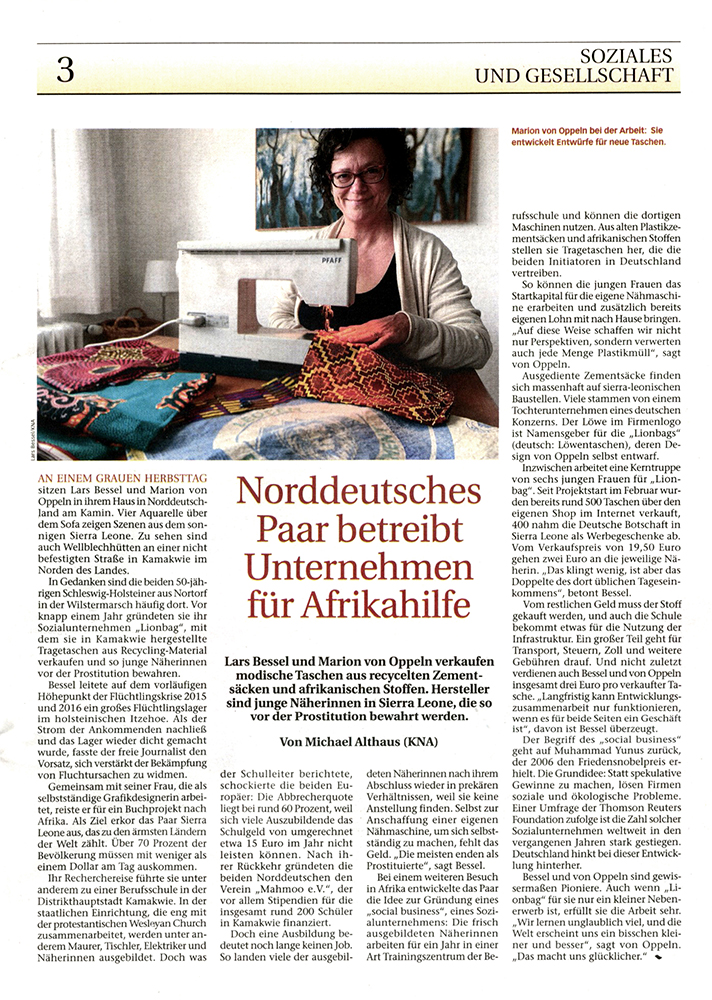 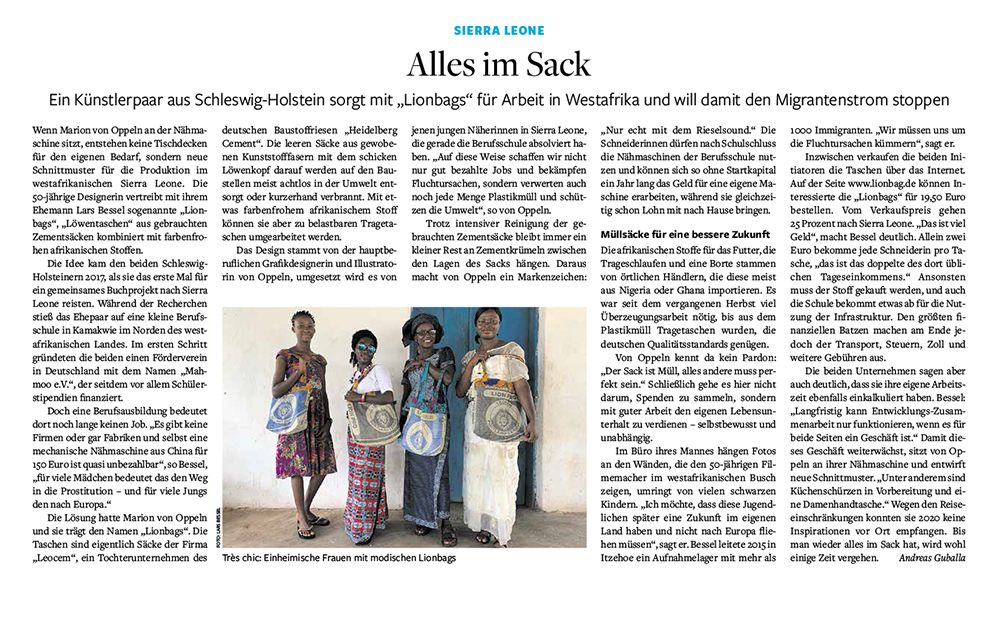 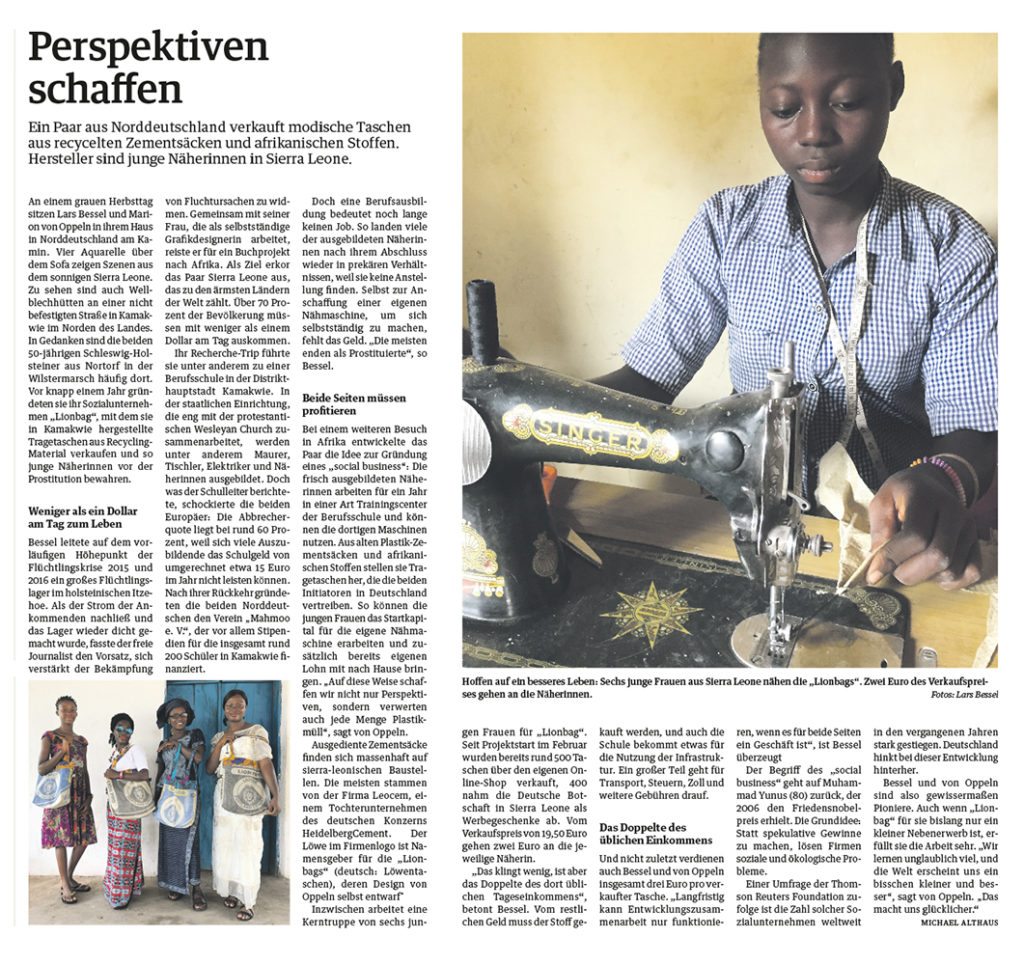 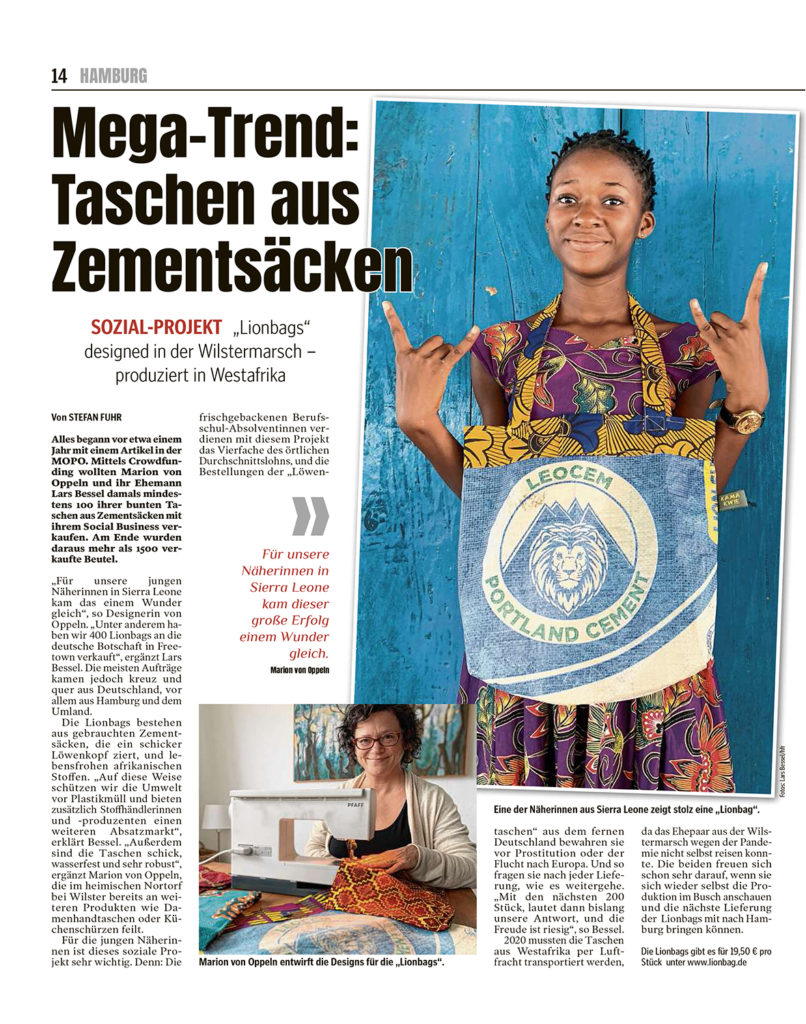 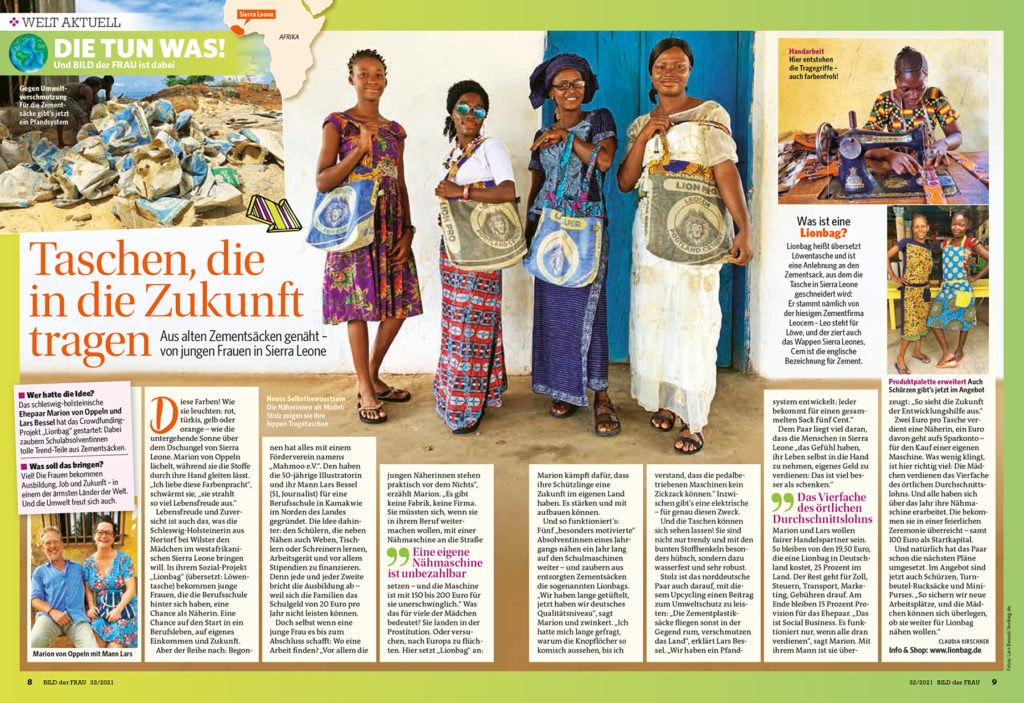